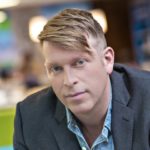 Editor’s Note: This blog is an excerpt from Good Faith: Being a Christian When Society Thinks You're Irrelevant and Extreme

For a couple centuries of American public life, a soft reliance on the state to endorse Christian values seemed to work just fine. Since most people assumed America was a “Christian nation,” it made sense that federal and state laws tacitly affirmed a biblical worldview and actively promoted Christian morals. From gambling and alcohol prohibition to tax exemptions and modesty laws, nominal Christianity benevolently reigned over the public square. Everyone stayed buttoned up, and, for the most part, we appeared to be a virtuous people, a moral people.

But in the twentieth century, more and more people began to see Christian morality as standing in the way of a new moral code: the morality of self-fulfillment. Throwing off burdensome traditional mores, people began to imagine life without a bothersome God standing watch. John Lennon captured the zeitgeist in his perennial hit: “Imagine there’s no heaven, it’s easy if you try . . .”

New research, as shown in the table below, highlights the extent to which Americans pledge allegiance to the new moral code, which can be summed up in six guiding principles.

Please indicate whether you agree or disagree with each of the following statements.

As you can see, the morality of self-fulfillment has even crept into American Christianity. Large percentages of practicing Christians embrace the principles of the new moral code. Too many Christians have substituted comfortable living for a life changed by the gospel. The government’s tacit endorsement of vaguely Christian morals has made it difficult, in many ways, to discern what it means to be faithful, beyond showing up.

In recent years, the morality of self-fulfillment has begun to bear its inevitable fruit: people want to fulfill themselves by doing things outside the bounds of cultural Christianity. And they don’t want the law telling them they can’t.

As a result of this shift, we are seeing laws that endorse the broader culture’s replacement of Christian morality with the moral code of self-fulfillment. And according to that moral code, any competing morality—say, a religion—that seeks to constrain someone’s pursuit of personal fulfillment must itself be constrained.

If something or someone stands in the way of my fulfillment, that obstacle must be removed.

In contrast to the dominant culture’s embrace of self-fulfillment as the highest moral good, good faith Christians believe living under God’s moral order leads to human and societal flourishing. As Scripture says, physical training is of some benefit, but “training for godliness is much better, promising benefits in this life and in the life to come” (1 Tim. 4:8).

Yet the extent to which the morality of self-fulfillment has taken hold of the hearts and minds of practicing Christians exposes an area of dangerous weakness in today’s church. This grafting of cultural dogma onto Christian theology must stop. In order for us to flourish as God’s people, his moral order must be allowed to rule our lives.

What are the principles of God’s moral order? Contrasting the new moral code are six statements about the way life ought to be, with Jesus at the center.

We’ve purposely expressed these six principles as a response to the six principles of the new moral code. Christians express something truly countercultural when we insist that real morality is rooted in something outside ourselves. Even if it feels uncomfortable at first, we have an obligation, in good faith, to speak as a counterculture to the spirit of the age. Beyond using our voices, we need to do the hard work of being countercultural in our own lives and churches. Only when we are consistent will our lives stir outsiders to rethink their own moral compass.

Living counter to the new morality is an uphill battle. Some days it feels like keeping the wind from blowing. Nearly everything about the broader culture is expertly marketed to appeal to our comfort, well-being, safety, and satisfaction. A delicious meal. Your dream holiday. The perfect house. Great sex. What will fulfill you? For ages, humans have bent toward self-indulgence. In our advertising age, there are countless ways of making people crave.

But then there is the way of Jesus. The Westminster Catechism’s first question asks, “What is the chief end of man?” The answer, as generations of Protestant confirmands could tell you, is “to glorify God and enjoy him forever.” There are profound moral implications here. If the highest goal of life is God’s glory rather than our own enjoyment, then our outward behaviors and inward character will have a drastically different shape.

When we feel the cultural winds blowing against us, let’s be reminded how long the moral ideas of the Christian faith have rolled on—no matter their competition in each successive age. Rest assured, good faith is on the right side of history.

Through the power of the Holy Spirit at work in us, Christians can confront the culture with a better way to live—the way of renewal, not of self-fulfillment.

David Kinnaman is the author of the bestselling books Good Faith, You Lost Me and unChristian. He is president of Barna Group, a leading research and communications company that works with churches, nonprofits, and businesses ranging from film studios to financial services. Since 1995, David has directed interviews with nearly … Read More

Gabe Lyons is co-author of Good Faith: Being Christian When Society Thinks You're Irrelevant and Extreme and founder of Q Ideas—a learning community that mobilizes Christians to advance the common good in society. Called “sophisticated and orthodox” by The New York Times, Q represents the perspective of a new generation … Read More

How Simeon reminds us of the true message of Christmas

3 truths to teach your family this Easter

How to pray for your in-law relationships during the holidays