The History of the Pro-life Movement

From pre-Roe v. Wade to the holistic view of contemporary advocates 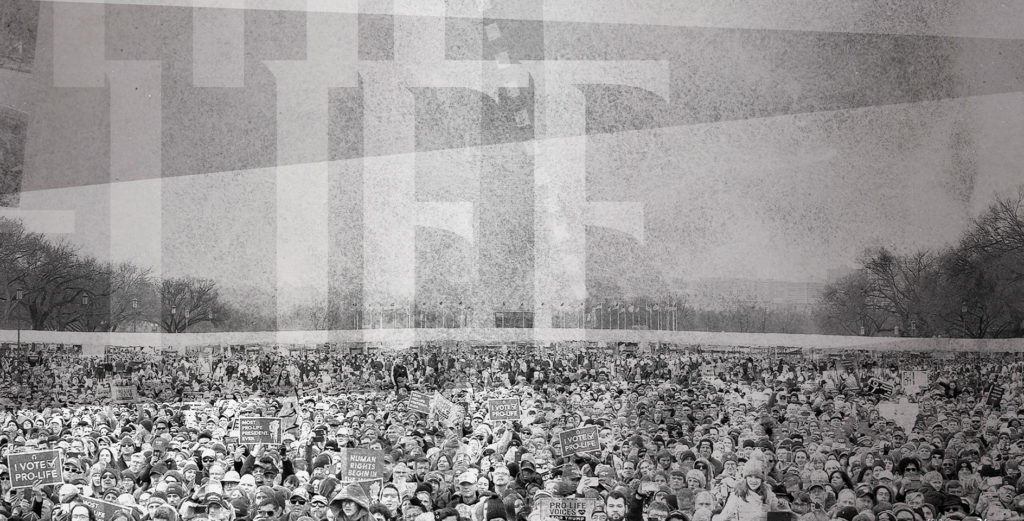 In August of 2017, Iceland made headlines because children born with Down syndrome were on the decline. However, this was not the result of medical advances or treatments for the genetic condition. Rather, it was revealed that women who found out their child had a diagnosis (or possible diagnosis) of Down syndrome were almost certain to have an abortion.

The news prompted swift reaction. Supporters of abortion saw this as a natural result of women having the right to choose what to do with their bodies and what kind of children they wished to bring into the world. But pro-life and disability advocates condemned the news and a culture that would discard children. It was but one moment in the long history of the pro-life movement—one that speaks up for those who have no voice and declares that these hidden persons possess inherent dignity and worth.

Prior to the 19th century, abortion had been legal (in some instances) throughout much of the United States. Most of the early regulations were aimed at protecting women from unsafe practices, with “quickening”—when the baby could be felt moving—serving as a line for when an abortion was permitted. However, as medical technology advanced and scientists were able to see the combination of genetic material from the parents that resulted in a fertilized egg, the line moved further backward. By the early 1900s, almost every state had criminalized abortion, though this was rarely enforced

In America, we often think of the pro-life movement arising from the decision of Roe v. Wade in 1973. It is also often cast as a clear political divide, with those on the right opposing the practice and those on the left supporting it. However, as Daniel Williams has shown in his history of the movement, it has roots going back to at least the 1930s and 1940s, and there was no clear political divide.1Daniel Williams, Defending the Unborn: The Pro-Life Movement Before Roe v Wade (Oxford, UK: Oxford Unviersity Press, 2016).

At that time, Catholics (and it was primarily Catholics) were the strongest opponents of abortion on the grounds that it (along with contraception) was a violation of the official church teaching on the sanctity of human life. These Christians drew on the long tradition of Catholic social teaching and argued that care for the poor was a duty for Christians. On the basis of their theology, they found it easy to advocate for FDR’s New Deal program which created a stronger social safety net for the poor. And in the context of that moment, it was the poor, just as today, who were the most likely to receive (and suffer) from an abortion. Because of the limits on when doctors could provide abortions legally, it was common for women to obtain illegal and unsafe procedures which threatened their life.

Protestants were largely unconcerned with the cause of abortion. Though some fundamentalists opposed the practice, most evangelicals were silent on the issue. And mainline Protestants, who made up the largest section of the religious landscape at the time, were moving from apathetic to sympathetic supporters, especially in the 1960s.

Expansion of abortion access and pro-life advocacy beyond Catholicism

In the 1960s, several states passed laws based on a revision to the legal framework proposed by the American Law Institute which allowed abortion for the physical or mental health of the mother, fetal deformity, or if the pregnancy were the result of rape, incest, or some other illegal action. Colorado was the first to pass the law, followed by North Carolina, and California (signed by then Gov. Ronald Reagan).

In 1970, New York debated and ratified a bill that permitted abortion-on-demand up to the six-month mark. Then in 1973, the Supreme Court ruled 7 to 2 in Roe v. Wade—drawing on a 1965 ruling that found a right to privacy with regards to contraception—that a person had a right to privacy in matters of abortion and states could not restrict abortion during the first trimester, though some restrictions could be implemented in the second and third trimesters. This framework would later be discarded in the 1992 case Planned Parenthood v. Casey which found that women could have an abortion before viability, and any restriction must not cause an undue burden on the mother’s right to seek an abortion.

Throughout this struggle, the debate was still largely a Catholic issue. No major Protestant groups were on record as opposing abortion, with only sporadic instances at the individual level. In fact, some were even supportive of the regulations at the time. The Southern Baptist Convention, the nation’s largest Protestant denomination, passed a resolution at its 1971 annual meeting affirming the sanctity of life, but also calling on Southern Baptists to work for legislation that would allow for abortion in the cases of rape, incest, fetal deformity, and the emotional, mental, and physical health of the mother.

However, in the 1970s, with the rise of the Religious Right and the work of figures such as Paul Weyrich (a Catholic) and Jerry Falwell (a Baptist), evangelicals would mobilize on the issue and bring it into the social consciousness of the average individual. This blending of Catholic and Protestant groups marked a pivotal turning point for the movement as it breathed new life and energy into it. The Catholics had already built out an infrastructure for working against abortion, most notably the National Right to Life Committee which was started in 1968 by Monsignor James T. McHugh at the request of the National Conference of Catholic Bishops. However, Catholics had been losing the fight at almost every instance as state after state passed more liberal abortion laws. They also found themselves unable to bring in the support of others because of the anti-Catholic bias that was common in American religion at the time.

With the support of Protestants, particularly evangelicals who were politically minded, the movement came to be a major wedge issue. Though recent scholars such as Randall Balmer have cast doubts on the claim that it was abortion which galvanized the leaders of the Religious Right, providing evidence of the late opposition to the cause, there is also substantial evidence that for many rank-and-file evangelicals, this topic captured their hearts like nothing else.2Randall Balmer, Thy Kingdom Come: How the Religious Right Distorts Faith and Threatens America (New York, NY: Basic Books, 2007).

Through the rise of sonogram machines (and the ability to see the child in utero), as well as literature and images that showcased the brutality of the procedure, most notably the 1984 film The Silent Scream that depicted an abortion, pro-life advocates began to work to counteract the narrative that this was a matter of personal choice. Drawing on the language of the Declaration of Independence, pro-life advocates argued for a “right to life” of the unborn. Additionally, they advocated before the courts and in state legislatures and Congress for just treatment. In 1976, the movement secured the passage of the Hyde Amendment which prevents the use of federal funds for abortion. And in 1984, the Mexico City policy, enacted by President Reagan, prevented U.S. aid to foreign countries being used for abortion.

In the recent decades, the fight has largely moved to the Supreme Court and individual state houses. There has been little significant change at the federal level which has led to an increased focus on state legislation. At the state level, pro-life advocates have succeeded in passing a number of anti-abortion regulations that severely limit the practice. Some have been aimed at pushing the line of viability further and further back (such as with fetal heartbeat bills), while others have restricted access through holding abortion clinics to the same standards as other medical providers. These regulations and bills face challenges at the Supreme Court which has made the nominating process so contentious for recent appointees, with some senators questioning just how strongly the dogma of the Roman Catholic Church, which opposes abortion, bears on the judicial rulings of Catholic nominees.3Sohrab Amari, “The Dogma of Dianne Feinstein,” New York Times (September 11, 2017), https://www.nytimes.com/2017/09/11/opinion/the-dogma-of-dianne-feinstein.html.

The face of the pro-life movement has also changed in recent years. What was once a (largely) white Catholic movement has come to be increasingly characterized by religious and racial diversity. With the influx of evangelicals and charismatic groups (and even some who are atheists), the pro-life movement has become more religiously diverse. Further, Latino and African American pro-life advocates, who are overrepresented in abortion statistics, have become important members in the coalitions working for systemic change in abortion laws.

Further, the pro-life movement has gone beyond just advocating for change to legal laws and now works to make abortion unthinkable. Through the vital work of pregnancy resource centers, churches and nonprofits provide medical care to women who would be seeking an abortion. This is a direct challenge to the work of organizations such as Planned Parenthood which profit from providing easy access to abortion for low-income and minority women.

Additionally, the pro-life movement has, in recent years, expanded its vision from looking only at abortion to a more holistic pro-life ethic that is “womb to tomb.” While not disregarding the work that still remains to be done in advocating for the unborn, pro-life advocates have articulated a theology that recognizes the inherent dignity of individuals, no matter their race, mental capacity, or stage of development. Looking to combat all challenges to human dignity, this new pro-life movement has advocated for changes to the way immigrants and refugees are treated, opposed euthanasia and physician-assisted suicide, and advocated for reform to systemic and racial inequality, recognizing that each individual is made in the image of God.

And there is considerable evidence to show that the pro-life argument is having an effect. At every turn, there are threats (as with the recent laws passed in Virginia and New York legislatures), but the United States is growing increasingly pro-life.4Mark Weiner, “NY Senate passes historic expansion of abortion rights” Syracuse.com (January 22, 2019), https://www.syracuse.com/politics/2019/01/ny-senate-passes-historic-expansion-of-abortion-rights.html.; Alexandra DeSanctis, “Virginia Bill Would Legalize Abortion Up to Birth,” National Review Online (January 29, 2019), https://www.nationalreview.com/corner/virginia-bill-would-legalize-abortion-up-to-birth/. According to the Guttmacher Institute, the rate of abortions has fallen below pre-Roe levels and continues to drop.5Guttmacher Institute, “Induced Abortions in the United States,” (September 2019), https://www.guttmacher.org/fact-sheet/induced-abortion-united-states# Though some of this is attributable to easier contraceptive access and decreasing rates of teen pregnancy, it is also the result of the work of the pro-life movement setting forth the dignity of the unborn for almost a century. What began with mostly Catholics alone now includes thousands from across the ideological and religious spectrum each year proclaiming the value of each person from womb to tomb.6Alexandra Desanctis, “The Pro-Life Movement You’ve Never Heard of,” National Review Online (March 19, 2020), https://www.nationalreview.com/magazine/2020/04/06/the-pro-life-movement-youve-never-. As David French has noted, though there has been gridlock in Washington, the culture itself is becoming more pro-life.7David French, “Do Pro-Lifers Who Reject Trump Have Blood on Their Hands,” The Dispatch (August 23, 2020), https://frenchpress.thedispatch.com/p/do-pro-lifers-who-reject-trump-have. One reporter estimated that almost half of the attenders at the annual March for Life in Washington, D.C., in 2010 were under the age of 30.8Robert McCartney, “Young activists adding fuel to antiabortion side” Washington Post (January 24, 2010), https://www.washingtonpost.com/wp-dyn/content/article/2010/01/23/AR2010012302400.html. And with the advances of medical technology, the point of viability continues to be pushed further back as early in some cases as 22 weeks.9Matthew A. Rysavy et al., “Between-Hospital Variation in Treatment and Outcomes in Extremely Preterm Infants” The New England Journal of Medicine 372, no. 19 (May 2015), 1807-9.

In looking ahead, a post-Roe world—a major goal for the movement—would bring the cause back to the states to advance legislation. And with an end of abortion, there would undoubtedly be an increased need for the pro-life movement to show that it is not just opposed to abortion but truly cares about mother and child, from womb to tomb.

Alex Ward is a doctoral student at the University of Mississippi studying evangelical political activity in the 20th century.